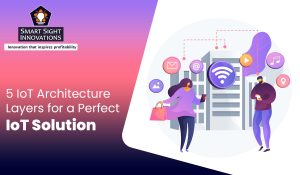 According to research, more than 35 billion IoT devices were connected to the internet in 2021 and the number is expected to double in the next five years. An umbrella term, IoT aggregates smart devices that consist of sensors and microchips.

Wireless doorbell cameras, smart gas leak sensors, or and robotic vacuum cleaners are all IoT components. Understanding basic IoT concepts and how they can provide additional value can help.

What are IoT solutions?

The origin and rapid development of IoT make possible a useful chain of things, data, processes and people. An IoT solution architect aims to create an ecosystem that combines technological components to develop a seamless communication path between devices and people to ease operations.

What is IoT architecture?

Architecture is a diagram or model that consists of two parts:

In other words, architecture is a list of essential technology components that goes beyond to define how these components interact or engage with each other.

A technology component means a system, device, or software that provides a specific technical capability. Components can be hardware, software, or a mix of both.

Defining components at the right level is part of the challenge of designing architecture. For example, in IoT architecture, the components may include connected devices, smart devices, sensors and actuators.

The components involved in the IoT architecture include four major components:

It is the unit that processes and displays the information collected through IoT. It includes analytics tools, AI and visualization capabilities. Technologies for this component include traditional analytics and visualization packages such as IBM SPSS and SAS.

It also includes specialized IoT tools and dashboards from cloud providers such as Amazon, Google, Microsoft, Oracle, IBM and application suite vendors including SAP and Salesforce.

This component ensures that applications, devices, security and infrastructure effectively integrate with existing company-wide ERP and other management systems.

Providers include the above-mentioned software and cloud players and other open source and middleware providers such as Oracle Fusion Middleware, LinkSmart and Apache Kafka.

This component involves securing the physical components of a system through firmware and embedded security providers such as LynxOS, Azure Sphere and Spartan. Traditional security vendors such as Symantec and Trend Micro also offer packages that focus specifically on IoT security.

This includes physical devices such as IoT sensors that capture information and actuators that control the environment. It also includes the network on which the sensor or actuator resides. It is usually a wireless network such as 4G, 5G, or Wi-Fi.

What are IoT layers?

Architecture is a structure for the physical components of a network and their functional organization and configuration, its operational principles and procedures and the data formats used in its operation.

IoT development depends on the technologies in use, application areas, and business aspects. There are various IoT architectures available for IoT devices. However, the 5 layer architecture is considered the best.

When a project with various cutting-edge technologies and a wide application area is the goal, the 5 layer architecture is considered a top choice. This model works as an extension of the original IoT architecture as it has two additional layers to the original model.

Perception is the first layer of the IoT architecture. In this layer, several sensors and actuators are used to collect useful information such as temperature, moisture content, intruder detection, sounds and infrared sensors.

The main function of this layer is to receive information from the environment and pass the data to another layer so that some actions can be performed, based on that information.

Sensors such as gauges, meters and probes collect physical parameters such as temperature or humidity, convert them into electrical signals and send them to IoT systems. These sensors consume less power, are smaller and widely used in refrigerators, computers and vehicles.

It is also called the communication layer because it is responsible for the communication between the perception and the middleware layer. All data transfer is done securely, keeping the received data confidential.

WiFi is the most popular technology in wireless networking and is great for data-intensive IoT solutions that are easy to recharge and operate in a small area. A good example is smart home devices connected to the electrical grid.

The middleware layer has advanced features like storage, computation, processing and action-taking capability. It stores all the data sets and based on the device address, gives the appropriate data to that device. It can make decisions based on the calculations performed on the data set received from the sensor.

The middleware layer is responsible for communicating and managing data in the system. It handles communication between components and inputs and outputs.

Middleware helps developers build applications more efficiently. It is the relationship between applications, data and users. For organizations with multi-cloud and containerized environments, middleware is cost-effective for developing and running applications to scale later.

The application layer manages all the application processes based on the information received from the middleware layer. This application involves sending emails, activating alarms, security systems, turning devices on or off, smartwatches, smart agriculture and more.

The success of a device depends on the technologies and their delivery to the consumers. The business layer performs these tasks for the device. This includes making flowcharts and graphs, analyzing results and how the device can be improved, and more.

The information generated in the previous layers brings better value if it results in problem-solving solutions and achieving business goals. Hence the business layer is defined as a separate phase, above a single application layer.

Now you know what IoT layered architecture is all about. As new applications and use cases emerge within the IoT industry, purpose-appropriate IoT protocols will continue to emerge along the way.

Today, most people use IoT devices constantly and share large amounts of sensitive data so the IoT architecture has added additional layers.

If you want to build a futuristic IoT development solution that will help you reduce costs, automate processes and enhance supply chains, get in touch with a firm that has specialists with extensive expertise in IoT to build systems of any complexity.

What is the Role of a Platform Application Programming Interface?

The API or application programming interface sets the rules for the creation and...

Which Backend Framework Should You Use For Your Next Project?

Today, frameworks are an integral part of the web development process due to...