Django vs Ruby on Rails – which is best for web development? 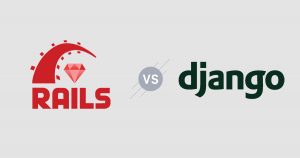 Web developers specialize in one or a couple of web development frameworks. One may go the PHP way, choose Drupal, WordPress, or Joomla or adopt a .Net platform. Then there is Django and you have Ruby on Rails for web development, preferred by top website development services. The debate will continue as to which suits web development best and there are no clear winners. Each has its advantages. How the web development company implements a solution is based on either deciding upon the ease of use or functionality of your website. Let us take a look at each.

Django and Ruby on Rails are quite well established.

Django has a slight edge in that it is older and it is based on Python which is seeing a resurgence in modern times, particularly in AI.

Both offer an exceptional user interface that delivers an excellent user experience, whether it is on desktops or mobile devices, permitting a host of plugins and add-ons.

Ruby does emerge a winner by a thin margin of about 0.7 percent.

Django and RoR follow the model view controller process. Django calls it Model View Template but it is not that different.

Not much of a difference as you can see. Both use different paths but achieve the goal. In the end, it is the proficiency of the web development company in either of these platforms that deliver the expected results.

Ruby interfaces with a lot more databases. In the end, it boils down to web developers and their familiarity with databases as well as Django or RoR.

Reasons to choose either of these platforms

As a user of Instagram, Twitter or Shopify supported eCommerce sites you will rarely have anything to complain about. Just goes to show that it is the web developer and competence that is more important than the tool.

If you plan to incorporate artificial intelligence and machine learning, then you may lean towards Django and Python.

Summary of pros and cons of each

Which one to choose for your web development?

It is difficult to recommend one over the other except in a few pointed cases. The issues to consider are:

The expertise and experience of a web development company in Django or RoR is important. The more experienced they are, the faster you get your site developed with lesser bugs.