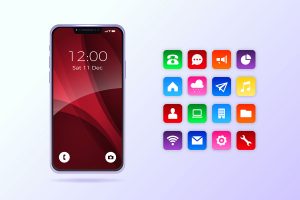 Businesses that have invested in building an app, find a lot of traction on Apple’s App Store. The prodigious company’s reputation, built over almost 45 years of  continuous and life changing innovation, is renowned for creating upscale, lifestyle products of excellent calibre. The introduction of the first iPhone in 2007, with its smooth interface and app centric operation, has ushered in a new age of smartphone users ever hungry for more information and a keen eye for practical solutions for sophisticated tasks. It is worthy of mention that apps, in their constantly evolving avatars have been meeting most of these expectations over a decade and a half since their inception, what with the successful integration of multiple other technologies which make using such apps easier by the day.

All this has led to a thriving iOS app development industry that in itself generates revenues in billions, while also providing a source of employment via enterprises that provide iOS app development services and also supporting a flourishing fraternity of iOS developers, who make the life of thousands of millions easier.

One of the best reasons to get into iOS app development is that iOS mobile applications (and consequently iOS developers who build iOS apps) earn higher revenue from the App Store when compared to Android apps, and one can use iOS apps conveniently on any device that runs MAC OS. Here, we look at a few aspects that developers must consider before they build iOS apps.

Determine the Objective of your App

The most important step before you decide to develop an app is to know what purpose it is going to serve. It is also important to perform a thorough market research into your competition. This will help you determine how your app can add more value to customers’ experiences or how it can perform better.

It is advisable to list the things you must know before you start developing the app, such as viability of your app idea, required technological expertise, development timelines, security measures, while also outlining which  device you would like your app to be optimized for – iPhones or iPads.

Your Coding Skills Are Significant

Developers must have the technical nous and experience to create a successful app, although since the advent of iOS 8 and the Swift programming language that Apple released in 2014, this has become simpler. Swift has proved to be easy to understand and use. It empowers iOS app developers to build apps for multiple devices such as the iPhone and iPad with the help of a program known as XCode that runs on Macs, a program often used by iOS app development companies.

Understand the User Base

It is critical to outline marketing strategies once your app goes live, and towards this you must know who your target audience is. Preparing surveys, customer segmentation to understand the average user’s expectations and demography is a must and you can also check who your competitors target to get a better understanding.

Developers must keep in mind that the app must be compatible with as many iOS versions as possible, or else risk losing users.

Statistics suggest that popular apps are those that are utilitarian, pragmatic, inexpensive, and most of all, interactive, by adding social network integration, which helps connect with users and can also provide valuable insights about user preferences.

Apple micromanages the content layout of apps on its app store. The fundamental rule of iOS app development is that the content should fit screen sizes perfectly so that users do not have to scroll left or right. 3 other important rules that Apple looks for are depth, clarity, and deference. Ensure all such aspects are attended to.

Developing a smooth, interactive mobile app will ensure quality users, but one must protect the app from crashes irrespective of any sudden surge in usage. It is the responsibility of the iOS app development company to see to it that your app functions deftly even when there is a rise in demand.

Battery life plays a major role in user experience, and hence developers must build apps that do not drain the battery, by ensuring that the app doesn’t constantly run in the background and isn’t always searching for updates. Run multiple test simulations to optimize battery life.

If you are looking for iOS app development services for your business, contact us today to build an iOS app that is secure and scalable, within a short development lifecycle.