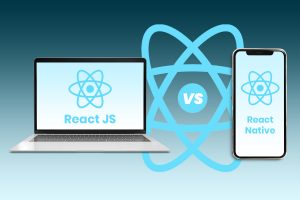 ReactJS and React Native are two immensely popular technologies when it comes to app development. Although they retain similar names, and have both been launched by Facebook, their enormous popularity still hasn’t meant that people understand the difference between the two!

Notwithstanding the few who are aware that one is a web framework, and the other is a mobile framework, many are still left stumped when asked about the differences between these two frameworks.

ReactJS development and React Native development have both gained prominence among frontend developers with their massive contingencies to build interactive UIs.

The ReactJS framework is a JavaScript library used to develop user interfaces on the web using declarative programming. This permits developers to design a simple overview and keep the app views consistent.

Commonly referred to as React, it is used to develop user-friendly and responsive UI components for front end and server-side operations. It is also used to build high performance and scalable web applications.

It is a component-based library that allows development of reusable components and also supports rendering of UI components. The ReactJS framework provides support for both frontend and server-side development.

The React Native framework is a JavaScript framework that enables developers to build apps for both iOS and Android platforms with near native UI by only using the JavaScript programming language. React Native development compiles the native code to create practically native mobile apps with reusable components. It uses ReactJS for abstraction, although the library components vary.

Here, we look at some of the business advantages and limitations of both platforms and outline the key differences when it comes to choosing between ReactJS development and React Native development.

One of the primary differences between React Native and ReactJS development is the way they are implemented. The React Native framework is an important tool for any app development service provider as it is used to develop cross-platform applications for both Android and iOS devices. ReactJS on the other hand is helpful when developers wish to improve UI aspects and enhance DOM manipulation in web applications. It also augments web page rendering for improved response to user input.

As compared to other cross-platform frameworks such as Ionic that use a WebView wrapper to render its UI, React Native provides a native look by leveraging the native device APIs. The stellar usability that React Native supports has made it immensely popular amongst many app development service providers.

Any React Native app development company that uses JavaScript can leverage this framework to develop apps with the help of an IDE or text editor, although it would require either XCode or Android Studio to run the code or to test the app.

ReactJS, on the other hand, is a JavaScript library used for web development. When developers setup ReactJS, they usually start with a bundler tool such as Webpack to identify the modules that are needed for the specific project. To summarise, React Native is a complete framework, whereas ReactJS is a library for web development.

The Hot Reload feature in React Native enables developers to the result of code changes of the app in real time without having to recompile. This feature reduces development time drastically (sometimes by up to 30%) and has become immensely popular feature amongst the developers. Developers also have access to many other useful tools for multiple purposes including debugging.

ReactJS also includes the Hot Reload feature, which is helpful when developers make miniscule changes to web app styles. For any major changes to the web app logic, it is advisable to reload the entire app.

React Native utlises a templating language called JSX to render its views. These views are rendered by loading the native UI component through the native APIs instead of running them through HTML.

Though this makes it more difficult to develop custom views, developers have access to third party libraries to help them in such scenarios.

The above differences highlight the contrasting purposes that ReactJS and React Native are employed for.

If you are looking to build web applications or mobile applications by leveraging the power of ReactJS development or React Native development respectively, contact the experts at Smart Sight Innovations for a free quote.