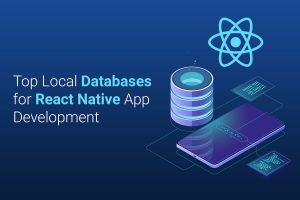 React Native is fast becoming the most sought-after technology over the last couple of years. The reasons for its prevalence are manifold but mainly attributed to the fact that it is a cost efficient and cross-platform framework. With a substantial reputation that precedes it, react native app development is favoured by many companies. Along with this demand for React Native app development is the increased focus on developers to build high-performing offline first apps that can be scaled whenever required.

There are ever-growing expectations and reliance on apps that are being used across multiple mobile devices. While React Native app development has bridged the gap between the performance expectations and practical implementation significantly, a robust React Native framework must be coupled with the appropriate database for smooth operability.

Fortunately, the React Native framework comes with some really good options for data storage. We will look at some of the top React Native databases and explore what each one of them brings to the table.

Immensely versatile when it comes to real-time and offline applications for wearable and mobile devices and works equally well with iOS and Android. A pertinent reason why developers use Realm to handle large volumes of data is because it has its own database engine. Realm is usually combined with React native for large sized and high-performance apps.

As the name suggests, a lightweight database that requires nominal setup and can be linked within the mobile app.

An open source Javascript database that stores data in JSON format with easy capabilities that is performed by developing, reading, updating, querying, and deleting queries with a single JavaScript API. The database is compatible with MySQL, CouchDB, PostgreSQL, and MongoDB.

A local database system that is deployed with React Native in-built with local data storage and data persistence between app reboots.

A lightweight, fast, and open-source database used for storing data provincially as well as on the cloud with support for sync across all the app’s clients.

Another open source, high performance database that empowers developers to handle data in multiple ways by offering APIs for multiple languages including iOS and Android. It also supports multiple data items for a single key.

While these are the most widely used React Native databases, there are a host of other backend tools that any react native app development company uses to build their applications.

The answer to which is the best database tool ultimately depends on your project type. Our experts will guide you towards the best React Native database that is ideal for your business.