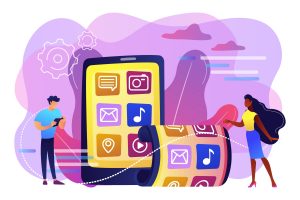 Ever since their inception, smartphones have increasingly become an indispensable part of people’s lives – so much so that there were nearly 3.2 billion smartphone users in 2019! As per statistics released by Leftronic, an individual has more than 63 interactions with their smartphone in a single day.

According to an Internet Architecture Board (IAB) report, over 60 percent of online digging was done through specific mobile devices.

So, the question arises, what exactly do people use in their smartphones? According to a particular report, smartphones are being used for specific apps more than 90% of the time. This report further adds that an average person uses 30 apps on their smartphone. Considering the above statistics, it would not be far-fetched to say that smartphones have become prime companions of the 21st century individual and their identity.

Elements to think about while creating apps for foldable smartphones

Foldable smartphones are a revolutionary invention in the smartphone segment. This latest innovation in an already impressive and hardnosed race in smartphone supremacy has brought about a new challenge for many developers regarding app development without compromising on the standards in quality that have been previously established.

Here, we look at some of the important things that mobile app development companies need to keep in mind while creating apps for foldable smartphones:

A prominent feature that distinguishes foldable smartphones from conventional smartphones is that they have significantly larger screens. Most of these foldable devices have a multi-window mode. A developer must ensure that the app that is being developed is compatible with the screen’s original size as well as the multi-window function.

The most reliable and effortless way to make this happen is by using this code- “resizableActivity=true.” For those wondering what this code does – basically, this code helps the system assume that the app developed by you supports the resizable screens and multi-window mode.

2. Consider the conditions of use by smartphone aficionados

This important feature affects the functionality and the workability of the app as well and compels developers to reconsider the distinguishing features on the default screen and the unfolded screen. The best option for any mobile app development company is to authorize the user to use the device with multiple fingers rather than just one finger. Therefore, it is imperative to create an app that runs optimally on both screens.

Adjustment of screen ratio also plays a crucial role while designing an app for the foldable smartphone. Certain smartphone manufacturers opt for larger and thinner screens, whereas some may go with bulkier and smaller screens. The screen ratios would also differ based on the type of the display that the manufacturers choose to provide with their handsets. Testing the developed app for different screen ratios is an important step to check the compatibility of the app. Using “max aspect ratio” and “minAspectRatio” helps identify the highest and lowest ratios that apps can bear.

With several device manufacturers now providing options for foldable smartphones, mobile app development companies must ensure their app functionalities remain up to the mark irrespective of the type of foldable phone it is running on. Custom mobile app developers should not compromise on quality and must ensure that they deliver the best quality apps that run seamlessly on every foldable smartphone.

Customer feedback is a crucial exercise that will help developers build better quality apps for users. The custom mobile app developers should note every feedback from the app user and the phone manufacturer to rectify the apps’ limitations to ensure an enjoyable user experience.

Considering all vital factors at the development stage will ensure a robust app for foldable devices which will enthrall users regardless of the handset that is under use.