8 Benefits and Reasons to Use AngularJS in Web Applications 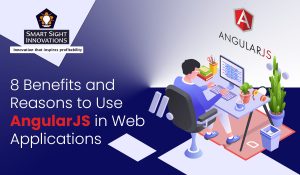 Summary: AngularJS with its many features helps developers save time and effort with their projects as it requires less code. It supports the MVC architecture and features like data binding, scopes, controllers, services, filters, directives, templates, dependency injections, etc. make AngularJS application development a popular choice to develop robust web applications. It unites all the best features with its end-to-end tooling resulting in a top-notch performance solution to meet developers’ challenges.

Originally developed in 2009, AngularJS is an open-source web application framework that is a great choice to build dynamic web applications. It allows you to use HTML as your template language and lets you extend HTML syntax to explicitly express your application components. Data binding and dependency injections eliminate most of the code you have to write. Plus, it all happens within the browser, making it compatible with any server technology along with other benefits, such as:

Even if you do not have any prior knowledge of AngularJS but are familiar with the above-mentioned languages, learning Angular becomes pretty easy.

Learning it opens up more opportunities for developers in this industry. One can learn to build and test web applications using AngularJS through widely available online tutorials. Once you learn, you need less time to develop web applications.

Because of its unique built-in features, AngularJS is easy to scale. This makes it possible to extend the functionality of HTML by attaching a specific behavior to it. In this, one can also create personalized instructions.

The AngularJS framework can be divided into three major directives:

A responsive user interface makes things easy to manipulate. HTML lets developers and designers work together. Developers can use the declarative binding syntax to link various UI components to the data model, while designers can focus on building the interface.

To customize means to add or remove features or functionality, which is done to meet specific needs. Moreover, customized software has user-friendly features instead of unnecessary elements as it is purely as per individual requirements.

AngularJS is an open-source JavaScript MVC framework. Due to its affordable cost, custom applications can be available to anyone. Being open-source, it provides the advantage of easily changing the source code to provide explanations.

It is possible to make changes to meet customer requirements. Anyone can add or remove employment. An open-source application, it has several other characteristics such as:

A single page application contains only one HTML web page. A single web page is loaded and further updates are done on that single page only. Since it is mostly used for building single-page applications, it works fast and is also user-friendly.

Single-page applications developed using AngularJS load faster and run smoothly on all platforms. It also provides an excellent user experience for the users and the maintenance part is also easy.

Every web developer usually needs to split the code into three separate components, such as:

Next, developers manually merge the code of those components. AngularJS saves time as this framework automatically bundles the code together.

The model component maintains and manages application data. The visual component displays all the data or parts of the data to the users. Whereas the control component determines the relationship between the model and the view.

Developers find it easy to manage the UI part of the application and its database using this MVC pattern.

One can easily test web apps using the AngularJS framework. It allows both: end-to-end and unit testing. Testing features, such as dependency injections help to see how the components of your web application are generated.

Also, the test features show how to resolve dependencies. Developers can test their applications and check for errors if any.

For developing high-quality dynamic web applications, AngularJS is the right framework. Its rich features do not make developers depend on any third-party software. Thus, AngularJS helps to save time and resources.

Big or small, every organization fears a security failure for their apps or websites. Irrespective of how strong the firewall is, there is always a threat lurking.

Security is increasing in every new version of AngularJS. There are two ways to secure applications using AngularJS.

Due to persistent threats from hackers, AngularJS has been developed to address critical security vulnerabilities. This can be applied from the customer end as well. With AngularJS, you can ensure complete security of your project.

All AngularJS applications that work now will continue to work in the future. This package will still be available on bower, CDNs and npm. With a Google-supported team of engineers, new improvements to the AngularJS framework are easy. Developers prefer AngularJS because it has gained credibility due to Google’s support.

A large network of developers is always there for discussion and ideas on AngularJS web application development. The Angular forums are where they are today because of the trust of the people who use them.

AngularJS is still an extremely stable framework for building web applications and is used by developers around the world. Its latest versions also use the same philosophy to grow.

AngularJS has a community of over a million developers. You can continue to grow the platform with AngularJS features that will help developers improve their productivity. Now that you know about the benefits of AngularJS, explore the great scope it has to offer and try it now.