How much is the minimum cost for developing a mobile application?

The main factors that decide the cost of the application are the type of app, platform, its framework, features, uniqueness, and the kinds of testing tools to be used in the project.

Should the app be designed for public use or it is meant to be used by the firm’s employees? What are the features and functions required in the software? What is the budget and within how much time does the app needs to hit the market? All these questions should be answered before approaching developers.

Simply put, the main factors that influence the price are the app’s robustness and complexity involved in developing the same. The cost can be lowered by using template based design and reusable components as well as frameworks. Here’re details about several key points that can influence pricing.

Human resource cost is perhaps the most crucial part of the app’s price. Creating an in-house team of app developers does not make sense unless the organization needs to develop and deploy multiple applications every month. Software developers charge on an hourly basis. Developing multifaced, complicated solution takes a long time. Hourly charges vary according to the geographical location of the developing firm. American developers can charge a minimum of around $150 per hour while Asian ones can ask for anywhere between $ 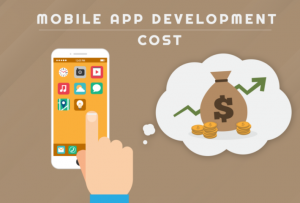 The developing company may take anywhere between two to four months for creating the application. However, a feature-centric approach can be great instead of focusing more on the timeframe.

The application’s cost differs depending on the platform. There are web apps, mobile phone applications, and even smartwatch apps. Then again, for mobile phones, you need to select between operating system specific (native) apps or cross-platform (hybrid) applications.

Apps for iOS need better budgets compared to Android development. Thus, these days, companies prefer to go for Kotlin or Flutter cross-platform solutions to save resources.

Other costs attached to the apps are for the cloud service, deployment, quality check, application administration, backend programming, and wireframing design.

The app’s dependency on the device’s features

Several apps remain dependent on the device’s inbuilt systems like NFC, a motion processor, GPS, etc. while working. Such applications need better API integration and thus cost more than the apps that work as a standalone element. Most of the brands prefer software with more in-built capabilities these days.

The visual complexity of the application also impacts its price. The software that involves using AR/VR technology or a lot of animation can be costly due to the use of technology. The new designing, frontend and backend efforts come with additional charges. Developing gaming apps is more expensive due to the same reasons. The multiplayer support, 3D graphics, and the use of motion sensor can shoot the number upward.

The software’s level of security needs to be selected according to the category, and of course, the amount of data that it handles. The development cost increases in case if multi-factor authentication system algorithms are used for making it hack-proof. It also needs a signature-based permissions framework, custom CA certificate, and other data encryption solutions. Looking at the rising app hacking incidents and security breaches, deploying the best security solutions is crucial, especially, for applications that support in-app purchases.

Application’s overall look can also be another expensive component as several factors like the logo, app icon, graphic design; tabs need to match with the theme. It also needs to pair with the brand identity. But remember, the problem-solving capabilities need to be given priority instead of looks. The application development firm can charge anywhere between $50 and $150 per hour for the designing part of the project.

At times, developers also need to add new plug-ins or modify the source code. The cost for the app increases whenever such additional functionalities are added to upgrade. Same goes when it comes to adding in-app purchasing feature.

Even the social media sharing feature requires additional APIs. Thus, sharing capabilities means an extra $500-$1500. Plus, let’s not forget the charges for expensive SDKs like those for Xplode, Tapjoy, Google Analytics, Chartboost, etc.

Integrating the application with the company’s ERP or CRM is another factor that can eat up some part of the budget.

The charges for testing and deployment

The app needs to be checked on different devices (screen sizes), internet speeds, and operating system versions before launching it in the store. The testing procedure, as well as its cost, is often underestimated. Let’s not forget that the app needs to be taken back to the drawing board if it fails to perform as per expectations set in the plan.

The deployment comes with a price tag. Apple’s AppStore charges an annual fee of $99 to app developers for making the software available in their store while Google Play costs $25 as a onetime charge.

After smartphone application development, additional funds need to be in place for customer support, cloud hosting charges, introducing updates, backend maintenance, and for marketing and promotions.