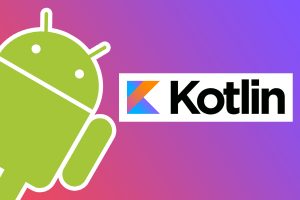 In 2017 Google marked a new step in android app development by announcing that it is going to support Kotlin. Kotlin is a statistical programming language that runs on JVM, also known as Java Virtual Machine.

The developers at Jetbrains (who devised Kotlin) were tired of Java’s verbosity and wanted to use a more concise language which was easily compatible with Java, which resulted them in starting work on Kotlin. Once the team at Jetbrains started working on Kotlin, they chose to make it an open-source language to increase the productivity of developers, as, on an average, developers write at least 20% less code when they use Kotlin.

Kotlin’s aggressive interference in interpreting values and commands makes it distinctly different from Java and requires specific and deep knowledge for effective execution.

Founded in 2011, Kotlin is a fantastic language, and in a very short span of time, it has become a pre-eminent and a highly reliable programming language used to develop apps. It gets its name from an island in Russia.

Some essential advantages and disadvantages of Kotlin

Ever since this incredible language was developed, it has been garnering a lot of praise for itself. Many well-known mobile app development experts have been raving about Kotlin and its versatility. According to some developers, Kotlin app development has produced better results than Java, inspite of which Kotlin has received mixed opinions in the developer fraternity.

Judging a programming language isn’t that easy, but here we attempt to decipher the pros and cons of using Kotlin to develop apps.

The advantages of Using Kotlin

Although Kotlin is a java-based language, it can eliminate the complicated errors of Java. Being a straightforward and compelling development language, Kotlin has a very precise and easy to learn syntax. This can increase developers’ productivity by hastening the pace that its easy and accurate codes provide along with a low maintenance rate.

Kotlin app development is interoperable with Java. If there is any complication in coding in Kotlin, Java and Kotlin can be used simultaneously.

It has a vast amount of support from many developers and SDKs. The Android studio has also been very supportive of Kotlin because all the tools that are accessed through Kotlin are already in use.

Kotlin has the most stable codes and has zero possibility of errors. These codes are clear, compact, and precise. The compiler can quickly identify the mistakes and save a lot of time. These features make it a better substitute for Java.

Kotlin had undergone many alpha and beta versions before it was launched. This makes it an immensely mature language.

Kotlin has been improving upon its features based on Java instead of just rewriting them. All the tools that a developer has expertise in, are the same in Kotlin as they are in Java.

The Cons of Kotlin

Although Kotlin and Java have many similarities, they are still not the same. The mobile app developers cannot switch to Kotlin immediately and seamlessly without spending a considerable amount of time to learn it thoroughly.

In some cases, Kotlin works faster than Java, but despite its straightforward syntax; it still needs longer to compile as compared to Java.

Despite the popularity of Kotlin, there are significantly fewer experts who have expertise in outline programming.

Also, even though Kotlin is being used extensively, there are still only a handful of programmers available in this field today.

Mobile app developers have been striving to create a language that is easily accessible to them. Kotlin is not the same as Java, but is better than that in many aspects. With Kotlin, programmers can now write safer and more stable and reliable codes, as a result of which this language has become increasingly popular ever since it was developed.

The relentless advancements in technology has resulted in developers opting to work with languages that are precise and straightforward to ensure better handling and quicker turnaround times when it comes to compiling code. Kotlin is one of those apps which makes app development easier and faster.