Python vs. NodeJS: Which One is Best for Your Project? 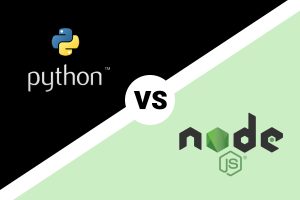 A very crucial step in application development is selecting the ideal programming language that is most suitable to cater to the requirements of the specific project.

Python and NodeJS are increasingly being deployed for backend development. Although NodeJS is not exactly a programming language, but an open-source runtime environment for JavaScript released in 2009 and has seen many developments. Based on Google’s V8 engine and written in C++, NodeJS backend development is enhanced with the V8 engine’s built-in interpreters, compilers, and optimizers. Python on the other hand is an open-source programming language that mainly runs on Google’s App Engine, which lets developers build apps with access to its multiple libraries and immensely helpful tools.

Below, we outline how NodeJS and Python perform when it comes to a few major aspects:

It is simpler to add components and modules when performing NodeJS backend development and enable both vertical and horizontal scalability by adding new resources and nodes respectively. NodeJS backend development is easily customizable and can be integrated with other tools such as Log.io, Migrat, Webpack etc., that amplifies its capabilities with project management, troubleshooting and data migration.

On the other hand, Python web development does not support multithreading as it uses the Global Interpreter Lock (GIL) that prevents its interpreter from performing tasks simultaneously and becomes increasingly difficult to maintain at scale. Python web development with Django and other frameworks such as Pyramid & CherryPy is immensely effective for test automations.

As is evident, Python lags behind NodeJS for backend development in terms of scalability, but both are equally malleable when it comes to integration with other tools.

The Node Package Manager is the nerve centre of NodeJS backend development, which is one of the largest software repositories and it is fast and easy to learn. Python’s Pip is also fast, reliable, and easy to use.

Although syntax is something that is based on personal choice, Python’s syntax is considered an immense advantage as developers have to write fewer lines of code as compared to NodeJS. Python’s syntax is very simple, and does not employ curly brackets, which makes it easier to read as well as debug manually.

When it comes to speed, NodeJS has a clear advantage and the reasons for this are manifold. For starters, NodeJS is interpreted by Google’s V8 engine. In addition to this, the code is executed outside the web browser, and the event-driven non-blocking architecture enables several requests to be processed at the same time, all of which accelerates code execution.

On the other hand, since Python for backend is an interpreted language, it is slower as compared to compiled languages, such as Java. Requests in Python are processed much more slowly and hence, Python web development results in slower applications than those built using NodeJS.

NodeJS application development is predominantly used for the back-end aspect of web apps, desktop apps and hybrid mobile apps, as well as cloud and IoT solutions as it enables cross-platform development which drastically reduces costs.

Being a full-stack development language, Python web development is used for both back-end and front-end cross platform requirements. Python is great for web and desktop development and is seen as an integral aspect of IoT and AI but is not preferred for mobile computing.

Based on JavaScript, NodeJS application development can be easily learned, except some advanced aspects such as its event-driven architecture, which requires deeper inspection.

Python web programming, with its simple and solid syntax, is comparatively easier to learn because writing a certain function in Python will take fewer lines of code than in NodeJS. Python and NodeJS are indentation and whitespace sensitive and are equally easy to learn.

NodeJS is a mature open-source language and has a thriving community that users can rely on for peer support. The Python web programming community is also large and lively.

Purpose of NodeJS and Python

The main purpose of NodeJS is for applications that have multiple concurrent requests, and witness heavy client-side rendering, or requires frequent movement of data such as in IoT solutions services, real-time chatbots, messengers, and also for developing real-time services or streaming platforms.

The main purpose of Python for backend development is that it is suitable for both small & large scale projects that involve data analysis, voice and face & image processing and machine learning systems.

If you are looking application development services, contact the experts at Smart Sight Innovations today for a free quote.