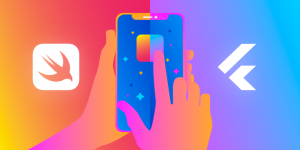 In the universe of mobile application development, choosing the best platform is a tremendous challenge for the developers. Due to some significant confusion, many believe in the native theory. On the other hand, others have shown their keen interest in hybrid mobile app development services. However, developers are in no doubt that each platform offers advantages. Obviously, each one has different perspectives and provides its own benefits.

But when it comes to iOS application development: which one is better? Is it Swift or Flutter? In today’s article, we will try to analyze all the aspects that will lead us to the right choice!

Flutter is Google’s cross-platform framework for developing apps for iOS and Android platforms with a single code base. It is an open-source SDK from Google, built on Dart programming language. The objective of this SDK (software development kit) is simple: to create multiplatform native apps. It not only serves mobile devices, but also the web and desktop environment. Flutter is nothing more than a mobile UI framework that works as a template for the developers. It offers a series of useful and practical functions that can be used in the program’s code.

Swift is the programing language of Apple. Many are already creating or modifying their projects and learning the advantages that the language brings. Compared to Objective-C, Swift brings additional facilities and features. However, Swift is a powerful programing language for iOS, macOS, TV-OS, and watch-OS apps. The style is similar to Ruby and Python. Swift iOS app development brings you productivity and dozens of cool features. Above all, it is easy to work with. However, if you need to build an app, particularly for iOS, Swift is better in terms of productivity and features.

According to Google itself, Flutter was created to improve the quality of applications and increase the speed of their development. Thus, it is possible to reach more users with the same solution. With Flutter, one does not bear the costs of creating two versions of the same app, and Flutter also makes it easy to build beautiful applications. Giving freedom to designers, this mobile UI framework allows the modification of each pixel on the screen. Of course, the beauty of an app depends on the designer’s creativity. But Flutter does not impose barriers to this development.

Instead of learning Objective C or Swift to build native iOS apps, Flutter can be used as a general-purpose Dart Programming Language. Undoubtedly, the custom mobile app development is considered an exciting way to reach the target audience. Having a single code base cross-platform framework is essential in creating goals for your strategy. It is crucial to accelerate the speed of the decision to compete in the digital world.

Swift features: it brings superior productivity and ease of use:

Apple had a great need to maintain a language that is easy to understand and easy to use. Swift was created with the proposal to make application programming easier, flexible, and cleaner.

Check out these reasons to develop your iOS application with Swift:

Which one is a clear winner?

First, the answer depends on your requirements. Let us brief you a little.

For you to understand, we have divided the verdict into four simple steps. They are the process of onboarding, development time, app reloading, and greater accessibility.

After seeing all these essential details, we can say that Swift is a clear winner. But that does not mean that Flutter is a backbencher. However, it still needs a lot of improvement in terms of competing with Swift. Flutter is faster, but Swift is better. Creating an application first in the Swift language will make it easier to test your limits and skills. Hence, selecting a professional IOT software development company can be a perfect choice.