Where is the Indian e-commerce Industry heading in 2019?

Factors like new technology, consumer’s demand, and new entrants with deep-pockets are influencing the way e-commerce market functions. The retail e-commerce business is set to touch $4.88 trillion by 2021. 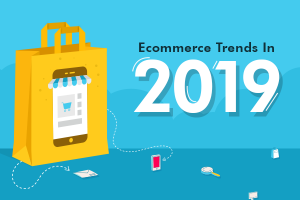 Not just the customers from developed countries, but buyers in developing nations are also moving to online and mobile channels for making purchases.

According to Shopify’s data, the e-commerce market in the Asian region is worth around $831.7 billion. The combined business in the Middle East and African region is said to be worth $18.6 billion. The European market is worth $346.5 billion, while the Australian e-commerce trade stands nearby $18.6 billion. North American e-commerce is said to be worth $552.6 billion, while South America’s business is estimated to be around $17.7 billion. Besides lucrative Europe and American market, the Asian region is attracting eyeballs.

Technology helps with customer service, sales, marketing, and retention activities. Thus, most of the players focus on implementing new technologies like artificial intelligence (AI), machine learning (ML) for offering a personalized experience to customers using a variety of devices.

The Reliance Jio network has played a vital role in ensuring that even the poor can afford a 4G handset and stay connected to the internet. Increased smartphone penetration and access to hi-speed internet in India also automatically brought good news for online shopping.

As per a study conducted by Boston-based consultancy group Bain and Company, India happens to be the fastest growing market for online shopping in the world. The same report pointed out that India’s online shopping industry witnessed a 53 percent annual growth rate between 2013 and 2017. Increased smartphone penetration, robust delivery infrastructure, and discount-driven approach are said to be the primary reasons behind the impressive growth rate.

How big is the e-commerce industry?

Last year, around 40 percent of the overall smartphones sold in the country were purchased online as per data released by Red-Seer Consulting. Besides smartphones, fashion, computers, consumer electronics were the top categories in online retail during the same year.

Multiple inter-state taxes were replaced with the Goods and Service Tax (GST) on July 1, 2017.

Initially, e-commerce players found it difficult to comply with multi-state registration instead of a single, central one. Companies had also expressed concern about Tax Collection at Source (TCS), invoicing, and the overall filing, credit-claiming procedure. However, the community finally embraced the GST regulations after initial hesitation. The government also offered a helping hand by extending the 2017-18 GST filing deadline multiple times.

Online marketplaces that make less than 20 lakh in annual revenue do not need to register and pay GST as of now. Experts are divided as far as the impact of the GST on the online marketplace is concerned.

Trends in the e-commerce industry

The newly introduced rules put restrictions on e-commerce players when it comes to holding inventory or selling products manufactured by companies that they own entirely, partly. The new FDI law has impacted larger players like Flipkart and Amazon. Buying in bulk and offering discounts won’t be easy anymore for big online sellers.

Foreign investors are cautiously waiting for the government’s new e-commerce policy before investing further in the sector. They are also asking the US to intervene for getting the policy draft moderated.

Most analysts suggest the new rules aim at offering relief to small traders who believe big companies are attempting to squeeze them and take over the retail sector with discounts as well as predatory pricing.

Anyway, capturing the market share seems to be the goal for small and large companies in the Indian online marketplace at present. Thus, equal attention is being given to the logistics network in rural areas to help firms grow their consumer base beyond metro cities.

Flipkart (backed by Walmart) is struggling to keep itself ahead of Amazon in the race. It has maintained a lead in fashion and smartphones categories since the last few months. Both companies are competing with local players when it comes to the grocery category. Companies that have differentiated offerings in the store could benefit in 2019.

In some tier 2, 3 cities, even cake and flower stores with small budgets and areas of operation are entering the online market space. Analysts suggest the bricks-and-mortar retail has a bright future in spite of the rapidly growing e-commerce market. Perhaps, this is the reason, giants like Amazon, Alibaba, and Walmart are slowly moving into offline sales channels by acquiring or partnering with startups, small shops, kirana stores, and retail chains.

Flipkart and Amazon happen to be the largest e-commerce players followed by FSN E-commerce, Snapdeal, PayTM (One97 communications), MakeMyTrip, Yatra, Myntra, BookMyShow, FirstCry, etc. They have maintained a presence in m-commerce with mobile sites and mobile apps.

Several startups and e-commerce companies have begun hiring management as well as engineering students from top IIMs, B-schools as the sector is expected to witness a high-growth phase during the coming months.

Even start-ups with limited capital can manage to get into the online shopping business. If you are looking forward to adapting the direct-to-customer route for sale with an e-commerce website, and m-commerce application, you should consider discussing your needs with Smart Sight Innovations.