Why should developers use Swift 5 for their next iOS app? 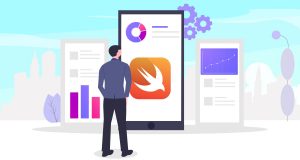 Swift and Objective-C are considered as primary languages for writing iOS apps by developers. However, Swift is gaining popularity due to its flexibility that helps in creating feature-rich, responsive applications.

Apple’s Swift programming language is continually evolving since its launch in 2015. Introduced in September 2019, Swift 5.1 has several new features and has made app development a little simpler for the developer community. The update reflects a swath of new features and improvements. Here are some of the crucial features.

Earlier, engineers often faced compatibility issues while working on iOS apps designed to function on multiple Apple devices. Swift’s new version has proved to be a significant relief. Developers do not need numerous libraries for creating applications that work on various devices. Thanks to the ABI stability, future releases are set to be binary compatible with version 5.

The ABI stability has resulted in better performance as apps respond quickly to interactions and commands.

Developers who offer mobile app development services in India can create and share binary frameworks with others, resulting in better support for the stability of modules. The feature has already benefited firms that develop apps exclusively for iOS, as code written in Swift 5 can be used in further versions of Swift as well.

Dynamic libraries can be cached in memory and easily shared within apps. This results in speedier application development. Put simply; the app size can be reduced as there will not be a need to use a separate code for various platforms.

Version 5 helps in getting the best out of the hardware as the Swift code can be transformed into native code with the help of LLVM compiler technology.

The standard library and the syntax ensure high-performance of the code even when used in a smartwatch or other apps.

Drastic improvements in the package manager

Some of the most impressive new functionalities and features in Swift package manager are the target-specific build setting, dependency mirroring, and customized deployment. Importing libraries in REPL becomes easy due to the Swift run command.

Releasing builds and debugging codes has become seamless since the release of Swift 5. The update also introduced support for dynamically callable code types, resulting in superb coding efficiency with languages like Python, Ruby, and JavaScript. A host of language proposals were implemented in Swift with the release of this update.

The open-source language is considered as a successor to Objective-C and C languages. With Swift 5, you can start creating a new app or use the framework to add new functionalities and features in the existing app. Swift can co-exist with Objective-C files, enabling the developers to get the best out of Objective-C API as well.

Swift projects can be scaled easily, and new features can be added as and when necessary. The conciseness and simplicity of the codebase are features that make it easy for firms to add more developers to the team at any stage. Swift syntax is more like natural English; such easy readability makes overall development work easy for developers.

If you are searching for a reputed firm that specializes in iOS mobile app development services in India, consider discussing your project with Smart Sight Innovations. The firm’s team of developers has worked on apps for clients from several categories.