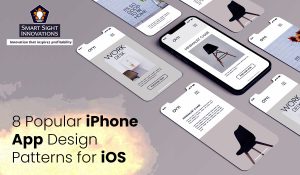 Synopsis: Expert iOS developers with advanced skills who have done many iOS projects will surely know that choosing a suitable design pattern is of utmost importance. Incorporating the right features helps a project to run smoothly and become more readable, flexible and reusable. Knowing about the most popular iOS design patterns helps. With the right knowledge about iOS design patterns, you can see what is available and what is common in iPhone app design patterns for iOS.

The main iOS design patterns are divided into 3 groups:

Let’s say you only need one object copy. This can be a real object such as a printer, server, or something that doesn’t have many copies. IOS devices have a UserDefaults object that can be accessed via a standard property. No one could make a new copy of the object.

This design method is needed to duplicate only one piece from the entire pattern. It describes all the objects on the screen and repeats a certain object one or more times. Singleton design is best when you need to manage resources.

Features of the Singleton design pattern include:

This pattern allows you to develop simple objects from complex objects by moving step by step. Also, you can create multiple object views using the same code in the Builder design pattern.

A complex object requires the initialization of common objects and many fields. Here, the code is also hidden inside the constructor with a lot of parameters. So to solve this, the Builder design pattern separates the construction of the object from its class.

It separates configuration from object creation. The calling object contains the configuration data and transfers it to the Builder object which is responsible for creating the object.

Features of the Builder design pattern include

The Decorator pattern allows you to wrap new functionality in easy wrappers and dynamically binds them to an object. Hence this design pattern is also known as the Wrapper design pattern.

This design uses (1) extension and (2) delegation.

When extensions are needed, the Decorator design pattern is used. For example, Windows operating systems require optional features such as a title bar, status bar and scrollbar.

In delegation, the Decorator adds the essential behaviors and responsibilities to the object without modifying its code. For example, it is useful when using third-party libraries that do not have access to the source code. Features of the Decorator include:

Observer objects help notify others about their status change. One object usually signals a change in another as in Push notifications. Some objects notice changes in other objects, especially when the objects change frequently.

In case of an internal dependency between different objects, action needs to be performed to change the state of that object. At times, objects need to update other objects without knowing their identity in the first place.

The Observer is dependent on other objects and uses publish and subscribe models. It uses 3 features:

Memento aims to save objects like Collections, UserDefaults, and NSCoding protocols using CoreData. The confidentiality of the data is maintained.

The Memento method externalizes and captures the internal state of an object so that it can be restored later. It is used whenever items need to be restored to their previous states.

For example, this technique is used by do-it-yourself mechanics who repair their car tires. The tires on both sides are removed, revealing the insides. Features of the Memento are:

For example, consider the computer startup to know the Facade design pattern. The computer starts up depending on hardware such as memory, hard drive, and motherboard. To reduce the complexity here, a computer will display all the functionalities using a single interface.

The use of a Facade is ideal when creating a complex subsystem. The Facade design pattern does the same by hiding the complexities of the system by allowing the client to have easy access to the system. Features of the mask include:

It allows classes with incompatible interfaces to bind together. Apple implements this template using protocols. This pattern is used when you need to integrate a component that contains code that cannot be modified. It is useful when dealing with an inherited class.

You can use an Adapter when you need a third-party class but the interface doesn’t match the exact application’s code. In the absence of specific functionality and limited extensibility, you can use Adapter using existing subclasses.

Take the example of Birds with fly and sound methods. Suppose you run low on Myna objects and want to replace them with just birds. All birds have some similar talents but their interface is different and cannot be used directly. Therefore, the Adapter pattern steps in. While Bird would be an adapter Myna could be a customer. Features of the Adapter include

The Template pattern is considered an algorithmic method, delegating responsibilities to subsystem steps. It allows subclasses to redefine the steps of an algorithm without affecting the overall structure. The algorithm is divided into several parts, each expressed in several ways using a template approach.

For example, creating software to shoot and save images requires the use of an iPhone or iPad and a photo gallery. Features of the Template design include:

There are over 20 app design patterns. The choice can be confusing. If looking for the best iOS app design, consult an experienced app development team.