Flutter 3: All That You Need To Know About Its Features and Updates 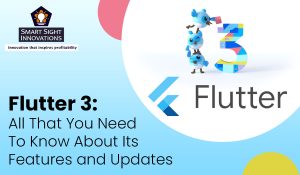 Google launched Flutter 3 in 2022. So knowing about Flutter 3, and what sets it apart from the others can be of great help. Flutter lets you build neat cross-platform mobile, desktop, and web applications from a single codebase. Flutter does it all with its easy-to-use programming language, Dart. Knowing about the features of flutter can help if you want to know more about flutter mobile app development for Android, iOS, and more.

According to studies, 90% of developers agree that Flutter reduces the time to build and publish an app. The new enhanced features of Flutter 3 include:

Stability for macOS and Linux

Flutter 3 is the main achievement as it officially supports all six platforms on the stable channel. Windows, web, Android and iOS have been secure and solid now.

In Flutter 2, the Flutter community supported the web and Windows platforms, along with iOS and Android. Flutter 3 adds firm support for macOS and Linux apps. Now you can develop your application on any or all of these platforms using a single codebase.

Flutter 3 allows developers to take advantage of cross-platform benefits and share as much UI and logic between these platforms as possible.

Flutter runs on Dart. It is a multi-platform, high-productivity portable language created by Google. The latest version of Dart, Dart 2.17 was released at Google I/O 2022 with new features and improvements, such as:

One of the top Flutter 3.0 features is the change to Material Design 3, Google’s in-house design language. The Flutter group offers a versatile cross-stage design framework to turn your Flutter application into a lovely intuitive product.

Material 3 is the new era of Material Design. The massive changes include many framework improvements, typography upgrades, and updates to several components. Material 3 widgets in Flutter 3 come with highlights, including:

Firebase supports Flutter. With the new Flutter 3, Firebase expanded its support and integrated Flutter as a first-class integration. Developers will see better documentation, tooling and new widgets like FlutterFire UI which provides a reusable UI for authorization.

Flutter 3 brings you Firebase Crashlytics. It is a real-time, lightweight crash reporter that helps you track down fatal errors. With Crashlytics, you can gather crash and error details.

With Flutter 3.0, the focus is on casual gamers to release an easy-to-use casual game tool kit. It offers a starter kit of templates and credits for ads and cloud services. So for casual game developers, Flutter 3 has some exciting features.

The game development community can take advantage of hardware-accelerated graphics and the open-source Flame engine to write casual game apps. Flutter 3 also provides guidelines and tutorials for game developers who have a vested interest in it.

Flutter 3 implies all the better changes for functionality and performance. In addition, multiple pull requests have been merged, giving Flutter a major performance boost compared to the previous version. Some of the improvements made in this latest version include:

This version has several redesigns. There are some major upgrades, especially for performance. Flutter 3 expands to include several productivity and performance features, such as:

In Flutter 3, the release includes new widgets and features to create foldable mobile devices. It allows you to create dynamic and engaging experiences with foldable devices. This feature has been developed in collaboration with Microsoft.

Flutter 3.0 versions supports variable refresh rates on iOS devices including iPad Pro and iPhone 13 Pro. Rendering capability is now at refresh rates of up to 120 Hz, which was previously limited to 60 Hz. Users can now have a smooth scrolling experience while watching fast animations.

Flutter version 3 includes new APIs for decoding images from the main thread minus sync. This is done through the browser’s built-in image code. Know that this feature accelerates image decoding, ensures that the main thread never blocks, and also cleans up past junk built-up.

The new web app lifecycle API for Flutter apps gives you the advantage of controlling the process of bootstrapping your app. Now you can take advantage of desktop support for your app.

What’s new and exciting in Flutter 3?

You will find some more updates on the Flutter ecosystem such as the following:

Now you can add anything to the ThemeData of the material library using the Theme extension. Instead of extending ThemeData and re-implementing the copyWith, and other methods, you can refer to ThemeData.extensions. Plus, as a package developer, you can provide ThemeExtensions.

Dart 2.17 was announced alongside Flutter 3.0, along with some anticipated highlights that developers have been waiting for. Dart is the secret behind Flutter components, and any upgrades to Dart will aid in working on further development.

There is a major performance difference between Flutter 2 and Flutter 3 when it comes to running desktop apps.

Creating applications for Windows was easy with Flutter 2.10, but neither macOS nor Linux was fully supported by this version.

Things have changed for the better now as Google announced Flutter 3 at this year’s Google I/O, along with support for building apps on both Mac OS X and Linux.

Hopefully, you now have a better idea of ​​the best features of Flutter 3.0. Flutter 3 goes from mobile-centric to multiplatform, and offers support for macOS and Linux desktop apps, integration improvements, increased productivity and performance, and Apple Silicon support.

Flutter’s innovative platform continues to benefit businesses of various sizes and capacities. It offers stability on six platforms while continuing to focus on performance improvements. For developers who need to create multi-platform apps, this might be a good time to consider Flutter.

What is the Role of a Platform Application Programming Interface?

The API or application programming interface sets the rules for the creation and...

Which Backend Framework Should You Use For Your Next Project?

Today, frameworks are an integral part of the web development process due to...