The Future of IoT Devices: What it Means for Connectivity 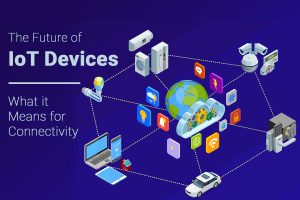 Like wildfire raging across the Australian outback, the Internet of Things (IoT) is encompassing and encapsulating every aspect of our daily lives under its lens. Although it sounds immensely convoluted, the Internet of Things (IoT) basically alludes to a network that connects physical things, such as vehicles, machines, wearables, and other devices, linked via devices and the internet to be able to communicate and exchange information with each other and enable required results.

The idea of tiny sensors sending and receiving data from the cloud over WiFi and mobile internet enables a remotely controllable ecosystem of devices. IoT in its most popular form has homeowners excited with the advent of smart homes, where voice assistants like Alexa or Google Echo can prompt controls such as switching on lights, tune the air conditioner to the desired temperature or order a 12 inch from the nearest pizzeria. The concept of connectedness can also work with smart systems controlling commercial real estate across a variety of scenarios.

The Next Stage in IoT Evolution

IoT development services are constantly looking for developmental iterations of which the latest is Edge Computing. It refers to local computational nodes that are the hearts of the sensor networks, which is a server node in an industrial or agricultural complex or even a smart home.

Edge computing enables a Local Area Network connection for sensors for lightning-fast data transmissions, while also enabling integrated accumulation of data for effective analysis and storage of such data which plays a very important role in AI & Machine Learning modules. One of the most critical advantages that IoT development services are enabling with Edge Computing is to retain ample computing capacity to host Artificial Intelligence / Machine Learning algorithms locally, thus enabling these models to execute the necessary commands on the basis of data received from sensors.

The Future of IoT

The intrinsic aspects of IoT software development have shifted from just being an ecosystem of interconnected devices for data collection, to being an end to end solution where in addition to collecting the data, the IoT system can also process and perform actions based on intelligent understanding of such data.

The future of IoT development services will comprise of 3 main divisions of IoT devices:

These include sensors that compile physical signals and convert them into data. The best examples of these include wearable devices that record our vitals, 3D printers, thermostats and other such devices. Many consumer devices that can execute simple functions such as turning the air conditioners off and on also belong in this segment.

These are slightly more complex systems that don’t just collect data, but also allow for situational processing of data collected from sensors and actuators to make intelligent decisions. An example of such a system would be an industrial complex where DCA’s control the movement of a fleet of automated machines and ensure peak performance by constant monitoring of the vital statistics of the machines. It also performs periodic diagnoses to suggest preventive service of machines, to ensure peak performance at all times.

The most complex of the “gather-process-react” sequence, these systems amalgamate sensor networks, edge computing nodes, and AI / ML algorithms to build autonomous objects that shift the burden of action from humans to machines that can perform almost all the actions autonomously.

The  number of devices getting connected to IoT and subsequently ready for big data analysis is expected to increase exponentially within a very short span, which will require ready network connectivity infrastructure. This will add another dimension to the already vast reach of Information Technology. The  proliferation of IoT connected devices can also be determined by the number of white papers and research studies being carried out in comparison to other fields such as desktop computing.

Target oriented networking helps extend corporate environments to non-industrial IoT requirements, with the help of automation and demarcation of IoT connected devices that link to the network wirelessly. Stretching Software-Defined Access (SD-Access) to these habitats with AI-enabled analytics helps diagnose and categorize devices into groups and enforce guidelines that minimize the security risk enabling a safe and secure IoT environment.

If you are looking for IoT development services to power your industrial and business needs, contact the experts at Smart Sight Innovations for custom solutions.