Why are iOS apps more secure than Android apps? 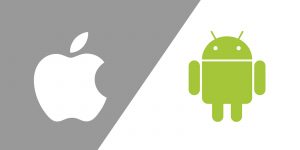 Until the last decade, cybercriminals targeted desktop computers and laptops. The game changed after the introduction of smartphones in 2007. People started using smartphones to make purchases, access social networking sites, transfer funds, watch entertainment content, and even access office/personal emails. Since then, cybercriminals have made iOS and Android devices their primary targets for malware and virus attacks.

It is common knowledge that every smartphone contains loads of user’s personal and professional data. The COVID-19 crisis has forced several companies to let their employees work from home or other remote locations. Firms have launched smartphone app versions for their CRM, ERP systems so that employees can access the same and work using their phones. Device and data security become very crucial in such a scenario, and at present, the Apple operating system and App Store applications seem to be way ahead of Android.

The most secure mobile operating system

There are two leading players in every industry. The world has Coca-Cola and Pepsi in soft drinks, Nikon and Canon in cameras, CNN and BBC in world news, KFC and McDonald’s in fast-food chains, and iOS & Android in the world of apps.

Which devices are safer when it comes to data security, Android, or iOS? The answer to this question is highly debatable. Apple’s iOS is considered a safer option as app developers do not have access to the operating system’s source code. Device users cannot make modifications. So, even hackers find it difficult to detect and exploit vulnerabilities in Apple devices. Android operating system’s source code is available to app developers, phone makers, and even device owners who can tinker with the code. Several phone brands make modifications in the operating system and make it weak. This helps hackers find vulnerabilities quickly.

There is a constant cold-war going on between Android and iOS fans around the world. Bloggers in favor of Android often write about vulnerabilities in Apple devices and vice-versa. However, even iOS’s critics would agree that Apple has better control over the apps available in its application store than Google’s control over the Play Store.  Apple is often criticized for giving seemingly arbitrary reasons and rejecting apps. But this has helped in keeping the store malware-free.

Tracking user activity is crucial for some of the applications to function. However, users must know how, when, and why these apps are accessing phone features. Apple’s iOS 14 makes it easier for iPhone users to detect which applications access data or device features.

Apple’s iOS 14 (set to be released later this year) version comes with a feature that exposes sneaky apps. The public beta version for iOS 14 has already managed to impress security analysts. Devices show notifications to users when any of the apps access the phone’s clipboard data, camera, microphone, and other sensitive data.

Device users can also decide if they wish to share a broad or precise location when applications seek permission to track the device location.

The firm is ready to introduce another set of changes to the App Store policies. With this version, the App Store will make it mandatory for developers to display a label describing the type of data the application collects. Put simply, before starting the download; the device user will be shown a label highlighting the information that the software would like to track after downloading and installing the same. If developers fail to include this information in the description (listing), the app will be removed from the store.

The feature has already started showing results; a list of famous culprits caught copying iPhone clipboard data includes the TikTok and LinkedIn apps. iPhone users who installed iOS 14 beta can see a ‘banner warning’ displaying which app has copied what data from the device. TikTok’s developers were forced to assure users that they would make changes to stop the app from doing it and make the video-sharing application more secure.

Users using LinkedIn on the iPhone and iPad found that the app reads clipboard data a lot. In July, a user filed a lawsuit against LinkedIn in the San Francisco federal court, all thanks to iOS’s new update.

Security analysts from around the world have welcomed this feature. Anything that improves transparency surrounding the functioning and data collection activities of apps is good news from the user-privacy angle. Now, it is up to iPhone users to decide if they wish to read the description, understand the consequences of sharing information, or click-through and download it.

Apple App Store policies are better than those implemented by Play Store?

At times, users unknowingly install a security threat on the device. Phone owners end up downloading such malware-laden apps as they often claim to be something else.

Apple conducts a detailed review of all the applications submitted by developers on the App Store. The publishing process for apps on the iOS store can take anywhere between 24 hours to two weeks. Thus, malicious apps do not make it on to the iOS App Store.

Companies and app developers end up changing or redesigning their apps when Apple updates its iOS security features. On the other hand, the Google Play Store review process takes around three days. But a higher number of sneaky, malicious apps manage to reach the Play Store as compared to the iOS App Store.

Presumably, Google focuses more on the Android OS’s user-experience aspects than on the dangers lurking on the Play Store.

Are you looking for a team of trustworthy developers that provides iOS Mobile App Development Solutions? You should discuss your project details with engineers at Smart Sight Innovations. The firm also has a superb reputation as a Dot Net Development Company.