Why Choose iOS Apps & What Are the Advantages of iOS App Development Services? 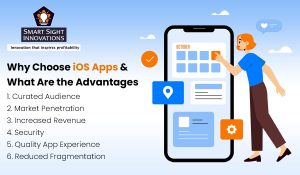 In recent years, smartphone users around the world typically have two major platforms to choose from – Android or iOS. And although the Android marketplace accounts for over 70% of all smartphone users, it is the iOS platform that is renowned for its easy usability and rich feature set.

The iOS app store is very particular about the types of apps it allows on its platform and provides developers with some amazing build capabilities. We look at some of the most important features of iOS apps and the advantages that iOS app development services have over their android counterparts.

With a very specific audience that uses the iPhone, developers who build apps for the iOS platform know the type of expectations that its end users have from the platform. When you contrast this to other platforms, developers know what users on the iOS ecosystem appreciate and the kind of features they need to include rather than having to guess and build functionalities that do not resonate with a majority of the audience.

Although Apple has an incredible presence and penetration in major markets around the world, one of the most important perspectives that app developers look at is the acceptance and proliferation of iOS apps in almost all the developed nations such as the US, Canada, Australia and the western European countries.

This gives app creators a ready market to target knowing that their offerings will be well accepted judging previous numbers. Another important aspect is that developed economies have major infrastructures in place that provide the necessary support for businesses from all sectors to hit the ground running without having to wonder or search for investments to build critical infrastructure. This also helps businesses scale and expand their business to multiple regions once they have completed the initial phase of their operations.

Statistics indicate that on average iPhone apps generate a higher revenue than Android apps, something that many businesses look at before deciding the platform where they would initially launch their products and services. Although the Android platform has a larger number of users, market research suggests that a higher percentage of iOS users are more likely to pay for app subscriptions as compared to other platforms.

This not only holds true for app subscriptions but also reflects on the percentage of in-app purchases users typically complete on iOS apps. One of the main reasons for this is that the iOS App Store in many markets asks for credit card information at the time of signing up which leads to one-touch transactions at a later stage.

With the increasing instances of privacy breaches, more and more users around the world are becoming particular about the security that comes with their mobile devices. iOS has inherently gained people’s trust when it comes to security. This is a result of consistent measures that Apple has taken over the years such as not allowing app installations from any other source other than their app stores.

The latest updates to its mobile device operating system alerts users when an app asks for permissions such as access to the microphone, location, contacts and camera. Although this has not gone down well with partner apps that use such information, it has further entrenched Apple’s image as a company that values user privacy over partner interests that monetizes such personal information to target ads and services.

Apple’s security features are specifically appreciated by iOS mobile app development services that build enterprise apps by making use of Apple’s stringent firmware and software security protocols and its use of data encryption to prevent duplication of data. iPhone users also witness an astoundingly low percentage of malware attacks as compared to other platforms.

iPhone users are typically categorized as being tech-savvy and open to innovation and typically open to trying new technologies. Such an open audience gives developers much-needed confidence to introduce technological innovations that tend to disrupt the market knowing very well that it will be well accepted by the end-user and they can expect genuine feedback that will only help them improve the product.

Leading enterprises partner with experienced iOS development tools and services for this very reason – to make cutting-edge technology available to its partners and end-users on their smartphones to drive productivity and increase revenue.

When Android developers build an app, they have to account for a wide variety of user types because of the numerous sorts of devices that use the Android platform. Not only this, but many Android device manufacturers also have their own OS built on the Android platform that comes preloaded in the device and which the user has to use.

This is because the Android marketplace is heavily fragmented with only around 10% of the users on the latest Android version, with many of them on versions that are almost three years old! This poses a significant challenge to businesses who want to roll out the latest features as older versions may not support those. Businesses thus will have to spend more time and money to ensure their apps are compatible with all versions to reach a wider audience.

iOS on the other hand has stable device releases every year along with a single operating system that works across all devices – iPhone and iPad. As per statistics, over 70% of iPhone users are on the latest iOS version. This is because Apple exerts complete control over both hardware and software development efforts of its products and drastically helps reduce fragmentation.

With not more than 20 options for mobile devices in the market at any point in time, iOS developers require much less time for development and testing. This also streamlines development efforts to a vast and ready audience waiting to lap up the innovations without requiring any additional tweaks.